I am not a fan of either President Bush, but I am a fan of State funerals, weddings, inaugurations, and the like.  So of course, this morning (Wednesday, actually)  I was glued to the public funeral of President George H. W. Bush.  There was, of course, much pomp and circumstance during the procession and the moving of his casket into the hearse and to the cathedral.  A 21-gun salute, the playing of “Hail to The Chief,” and the images of his family saluting and watching on the sidelines.  I confess, these state events always make me very emotional.  I am aware of our past history and of history being made while we watch.  Television shots of all of our living presidents, sitting together, chatting and sharing whatever experiences bind them to each other, always moves me.  Regardless of our political ideologies and party affiliations, we are all Americans.  These days, it’s hard to remember that and today, it comforts me. 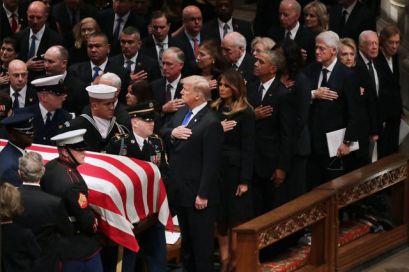 I texted my son, who lives in DC, to ask if he was at work (he was).  And during our “conversation,” I mentioned all the presidents who had passed during my childhood.  Kennedy, Hoover, Eisenhower, Truman and Johnson.  I also noted that I’d witnessed the assassinations of Robert Kennedy and Martin Luther King, Jr.  These memories take me back to sitting in the school auditorium watching these funerals on the small TV, feeling somewhat bored but glad for the break from class.  I remember my mother’s tears after the Kennedy and King assassinations and while I didn’t yet have the perspective or wisdom of years, I knew that our country had changed forever.

As I write this post, I am riveted to my TV.  The speakers, all friends of the late President, reminisce, telling personal stories of their relationships with him.  But they also represent their own part in our history and it’s touching to watch them say goodbye to an old friend and sometime adversary.

The final speaker was President George W. Bush.  I was impressed with his composure and while I’ve never been a big fan of his or his father, I was touched by his fond memories and jokes, as a loving son.  I remember my own eulogy when my parents passed.  It was so hard to remain focused and to not dissolve into tears.  Neither of my parents was as public a person as a president, but both were very involved in the community and my dad was a judge, so a fairly public figure.  I remember feeling the pressure to strike just the right note, to be personal but to also paint the picture we’d like people to remember.  It’s a challenge, but I felt pride as I spoke.

In the end, a funeral is about remembering a person’s life, both public and private.  We all have a public face and the one we show to those closest to us.  And the funeral of a president allows us to gain some insights into the private side of a powerful, public person.  It also allows us to gain some perspective about our history and to reflect on where we are.  Today, I am sad because I feel we’ve fallen far away from the values of dignity, respect, tolerance and unity in leadership.  But I am hopeful that we’ve been reminded of someone who served with both dignity and a sense of personal responsibility, and that someday we can return to that type of leadership.

May President Bush’s memory be for a blessing. 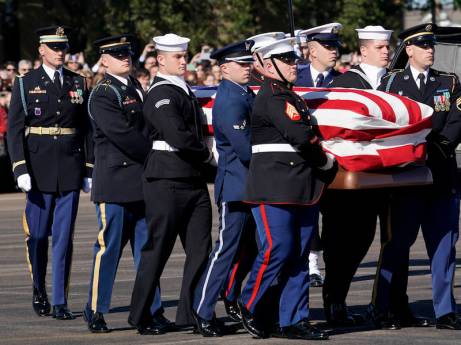 A community for writers & readers

Grateful for the present moment

What I Wish I Knew Before I Retired

A safe haven where the mind is free.

Life According to Somebody

Living life intentionally and with gratitude after cancer

Everyone deserves their 10 minutes!

Welcome to my world.

"You can't get a cup of tea big enough or a book long enough to suit me." ~C.S. Lewis

WordPress.com is the best place for your personal blog or business site.

A community for writers & readers

Grateful for the present moment

What I Wish I Knew Before I Retired

A safe haven where the mind is free.

Life According to Somebody

Living life intentionally and with gratitude after cancer

Everyone deserves their 10 minutes!

Welcome to my world.

"You can't get a cup of tea big enough or a book long enough to suit me." ~C.S. Lewis

WordPress.com is the best place for your personal blog or business site.